Abstract
Purpose: To evaluate the clinical characteristics of epiretinal mass (EM) in eyes without pre-existing retinal conditions.
Methods: The prevalence and the characteristics of eyes showing EM during spectral-domain optical coherence tomography (SD-OCT) examination were reviewed.
Results: Among 2,221 eyes undergoing SD-OCT, 34 (1.5%) were found to have EM, which was detected following onset of posterior vitreous detachment (PVD); 32 of 34 (94.1%) eyes showed PVD, while two eyes (5.9%) showed diffuse vitreomacular adhesion at the time of EM detection. The EM was most commonly located at the superior macula, followed by the nasal macula. Of the 17 eyes with SD-OCT images obtained at the time of EM decrease, EMs from 12 eyes (70.6%) had diminished completely, while EMs from five eyes (29.4%) had resulted in low-grade epiretinal membranes (ERMs). The time interval between EM appearance and disappearance was about 10 to 12 months.
Conclusions: In eyes without pre-existing retinal conditions, EM can develop after PVD and might indicate the existence of a denatured vitreous cortex with a cellular component. These lesions usually resolve spontaneously but can be associated with a low-grade ERM.
Keywords : Epiretinal membrane; Optical coherence tomography; Posterior vitreous detachment

Epiretinal proliferation (EP) presents on spectral-domain optical coherence tomography (SD-OCT) as a homogenous material of medium reflectivity at the inner retinal surface. It was described first by Pang et al. [1] as a thickened epiretinal membrane (ERM) associated with lamellar macular hole (LMH). Similar lesions have been found in 5.1% of eyes with vitreomacular interface (VMI) diseases, such as LMH, full-thickness macular hole (FTMH), ERM, and vitreomacular traction (VMT) [2]. The coexistence of EP and FTMH has been associated with poorer anatomic and visual outcomes after vitrectomy, suggesting chronicity as this lesion was associated with an advanced stage of FTMH [3]. Recently, we detected a homogenous epiretinal mass (EM) of low reflectivity in the vitreoretinal interface (VRI) in eyes without pre-existing retinal conditions. The purpose of this study was to assess the prevalence and long-term prognosis of this kind of EM in eyes without pre-existing retinal conditions.

We conducted a retrograde chart review of patients who visited and underwent SD-OCT for cataract surgery at Keye Eye Center, Seoul, Korea, between February 2018 and June 2020. SD-OCT imaging was performed using the Spectralis ophthalmic imaging platform (Heidelberg Engineering, Heidelberg, Germany). Eyes with retinal diseases, such as those with age-related macular degeneration, diabetic retinopathy, retinal vascular occlusions, retinal detachment, or any kind of retinal break, or those with a previous history of vitreoretinal surgery were excluded from this study. The study was approved by the Institutional Review Board (IRB)/Ethics Committee of Keye Eye Center, and its protocol adhered to the tenets of the Declaration of Helsinki (IRB number: 2020-0724-001).

SD-OCT images were reviewed by two retinal specialists (J. H. P. and S. J.), who agreed on the detection of preretinal weakly reflective mass-like lesions, as shown in Fig. 1. Only eyes with mass-like lesions with a thickness of greater than 20 μm detected by caliber tool were included. In a previous study, the thickness of clinically significant ERM was about 20 μm on SD-OCT images [4]. Therefore, we adopted 20 μm as the minimum thickness for EM diagnosis to avoid imaging error. The maximal thickness and diameter were measured with the caliper tool. The location of the EM was described according to the Early Treatment Diabetic Retinopathy Study map according to the following positions: fovea, superior inner macula, nasal inner macula, inferior inner macula, temporal inner macula, superior outer macula, nasal outer macula, inferior outer macula, and temporal outer macula. The total duration of the presence of EM on optical coherence tomography (OCT) during follow-up was calculated. The interval between the onset of posterior vitreous detachment (PVD) and the appearance of EM was calculated when possible. The VMI and the presence of ERM on SD-OCT images also were evaluated. VMI was classified as previously defined by the International Vitreomacular Traction study group [5] as follows: 1) no PVD; 2) focal vitreomacular adhesion (VMA) of 1,500 μm or less; 3) broad VMA greater than 1,500 μm; 4) focal VMT of 1,500 μm or less; 5) broad VMT greater than 1,500 μm; and 6) PVD. VMA was defined as an elevation of the cortical vitreous above the retinal surface, with the vitreous remaining attached within a 3-mm radius of the fovea. The presence of an ERM was evaluated as previously defined by Delyfer et al. [6].

The Statistical Package for the Social Sciences version 15.0 for Windows (IBM Corp., Armonk, NY, USA) was used for statistical analysis. Descriptive data were recorded as mean ± standard deviation unless otherwise specified. Visual acuity was recorded as a decimal value and then converted to a logarithm of the minimum angle of resolution (logMAR) scale value for statistical analysis. The Student’s t-test or the Mann-Whitney U test was used for the comparison of continuous variables between groups. The chi-square test was used for comparison of categorical variables between groups. A p-value less than 0.05 was considered statistically significant. 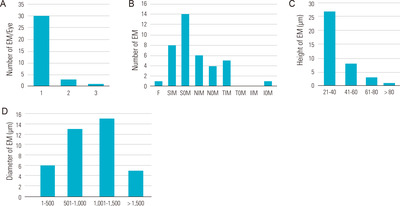 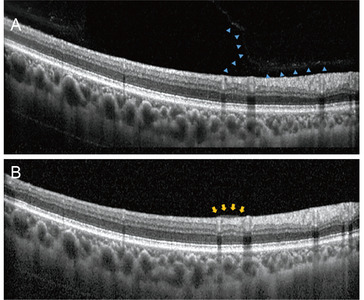 Fig. 4. Representative images from an enrolled patient. (A) The posterior hyaloid membrane (PHM) was partially attached to the retinal surface (arrowheads). (B) The PHM was detached one month later. A small amount of epiretinal mass (arrows) was detected on the inner retinal site where the PHM was attached. 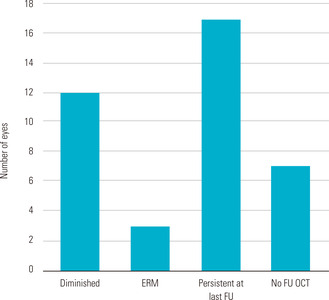 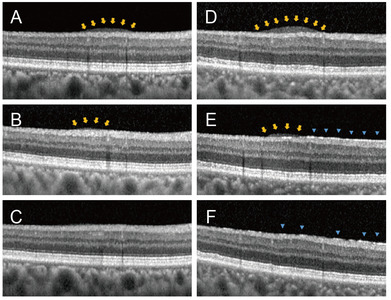 In this study, the prevalence of EM in eyes without pre-existing retinal conditions was 1.5% of our study population. Though the subjects with EM were older and had greater LT values, there was no significant difference in the ocular characteristics of eyes with EM compared with those without EM, suggesting that EM is a physiological phenomenon. This result is in agreement with those of many studies that have shown that the LT increases with age [7]. Also, eyes with EM had larger proportions of ERM and PVD. It is well known that ERM occurs typically after PVD, and ERM and PVD generally develop with VRI changes, which progress with aging.Therefore, this study showed that EM is expected to have associations with ERM, PVD, and LT due to VRI change or aging.

The cellular sources of EP [8] and ERM [9-18] have been speculated to be Müller glial cells, vitreous components, or retinal pigment epithelial cells. We speculate for the following reasons that the EM in this cohort represents mostly denatured collagen from remnant vitreous with less of a cellular component: 1) with SD-OCT imaging, in our cohort, EM appears as homogenous material of low reflectivity compared with the EP with medium reflectivity seen in VRI diseases; 2) the EM in our cohort was detected most abundantly at the superior macular area, followed by the nasal macular area, while the EP seen with VRI diseases is usually detected around the fovea; 3) there was no inner retinal defect around the EM in our cohort; 4) the EM resolved spontaneously in most of our cases except for a few cases that resulted in mild ERM; and 5) since there was no case with retinal detachment or retinal breaks in the present study, we could rule out retinal pigment epithelial cells as the source of the EM in this cohort.

Given the temporal relationship between PVD and development of EM, EM might have been induced by PVD at the posterior pole. It could be that, during PVD onset, portions of the vitreous cortex and posterior hyaloid membrane (PHM) remained on the inner retinal surface (Fig. 4). The tractional force induced during PVD onset might have activated cellular proliferation and extracellular matrix production on both the inner retinal surface and the PHM (Fig. 3). The actual tractional force from the PVD on the retinal structure can be strongest in the superior macula—and stronger than that on the inferior macula due to gravity—which might explain the higher frequency of EM in the superior macula.

There are several limitations in this study. First, this was a retrospective study of eyes without apparent retinal disease. There is the possibility that subclinical retinal diseases exist in our study population that were not detected by conventional imaging. Second, given that the distance between the OCT line scans is 200 μm, overestimation of the spontaneous resolution of EM might have occurred.

Although the EM spontaneously disappeared in many cases, some cases showed formation of ERM. It is not clear whether the component of EM directly contributed to formation of ERM or whether ERM formation t ook place at the same time. By reviewing the macular OCT scans of eyes without pre-existing retinal disease, we found that the VMI experienced dynamic changes during PVD. Meticulous observation of the VMI during PVD will yield more insights into VMI diseases, such as ERM.