Abstract
Purpose: Present study aimed to investigate the presence of seasonal variation in the prevalence of rhegmatogenous retinal detachment (RRD) and to analyze the associations of such variations with meteorological variables.
Methods: Nationwide insurance claims data from July 2014 to June 2017 were reviewed. All patients who underwent surgery for RRD were included, but those with a history of ocular trauma were excluded. Meteorological parameters were acquired from the Korea Meteorological Administration. Average monthly temperature (℃), humidity (%), and hours of sunlight were included in the analysis.
Results: In total, 39,410 cases among 32,088 patients were included in this study. RRD reached peak prevalence in the spring, whereas its lowest prevalence was observed in the winter. The highest prevalence was observed in concert with a temperature range of 20℃ to 25℃, 60% to 70% humidity, and 160 to 200 hours per month of sunlight, and less than 100 mm per month of rainfall. The prevalence of RRD decreased with extreme temperature and humidity and increased rainfall.
Conclusions: The prevalence of RRD in Korea exhibits seasonal variations and appears related to meteorological variables. The occurrence of RRD is reduced in extreme weather conditions that limit physical activity. These results show that understanding seasonal and climatic effects on the development of RRD can aid in its prevention and assist in early diagnosis.
Keywords : Climatic influence; Epidemiology; Koreans; Rhegmatogenous retinal detachment; Seasonal variation

Rhegmatogenous retinal detachment (RRD) is a condition in which vitreous-derived fluid enters the subretinal space through an open rupture and separates the retina from the retinal pigment epithelium [1]. It is a major cause of gross defective vision worldwide [2]. Known risk factors for RRD include posterior vitreous detachment (PVD), peripheral retinal degeneration, atrophic retinal hole or break, myopia, cataract surgery, trauma, outdoor activity, intraocular inflammation, and a wide range of familial vitreoretinal disorders [3-8].

It has been unclear whether seasonal variation or mete-orological factors affect the prevalence of RRD. Thus far, seasonal variations of RRD have been reported in several studies [4-10]. In some studies, the RRD prevalence demon-strated a summer peak and winter nadir [4-8]; however, in others, no seasonal variation was found [9,11-13]. Some research also noted a winter peak and a summer nadir, in direct contrast with the results of the majority of the literature [10]. Weather parameters may play a role in the development of spontaneous RRD, but it is not yet clear whether a seasonal or meteorological predilection exists for the occurrence of RRD.

The purpose of this study was to investigate the effect of seasonal variation on the occurrence of RRD and, if such an effect exists, to elucidate the meteorological factors involved in such a phenomenon. Further evaluations of allergic disease patients were also performed in order to evaluate the influences of non-meteorological environmental factors, such as pollen.

The authors conducted this study with the approval of the Institutional Review Board of Yonsei University College of Medicine (IRB No. CR318308), and the study respected the tenets of the Declaration of Helsinki. The authors performed their investigation without the need to obtain informed consent because all data used in this study were fully anonymized before they were provided to the authors.

Meteorological parameters were acquired from the Korea Meteorological Administration, which provides past weather information as open-source data [15]. Data concerning average monthly temperature (℃), humidity (%), and hours of sunlight from July 2014 to June 2017 were acquired and included in the analysis.

Hypertension and diabetes were defined using International Classification of Diseases, 10th revision (ICD-10), diagnosis codes for hypertension (I10) and diabetes (E08-13) were present, combined with prescriptions for antihypertensive or diabetes medications. Other medical conditions, such as allergic rhinitis and atopic dermatitis, were defined when patients had an ICD-10 diagnosis code corresponding to the disease, regardless of the prescribed medications.

Demographic data of patients who underwent surgery for RRD

Monthly and seasonal variations in the surgical repair of RRD

The monthly prevalence of RRD was highest in March and lowest in February (p < 0.001) (Fig. 2A and Table 2). In other words, the occurrence of retinal detachment peaks during the spring months but reaches a yearly low during the winter months (Fig. 2B). All 3 years analyzed showed a similar seasonal pattern, and the difference in seasonal prevalence during each of the 3 years was not statistically significant (p = 0.6815). 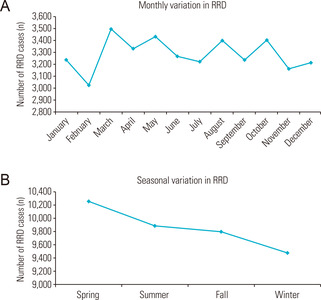 RRD prevalence according to meteorological variables 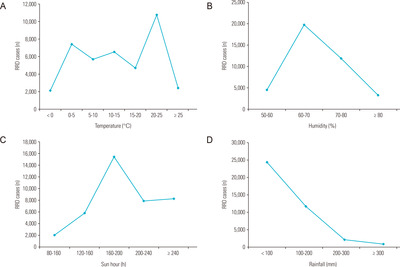 The prevalence of RRD in patients with and without atopic dermatitis

There was no difference in monthly prevalence between atopic and nonatopic patients (p = 0.259), but seasonal differences were significant (p = 0.0288). Patients with atopic dermatitis had the highest peak in prevalence over the summer months, while the lowest prevalence was apparent during the fall months (Fig. 4). 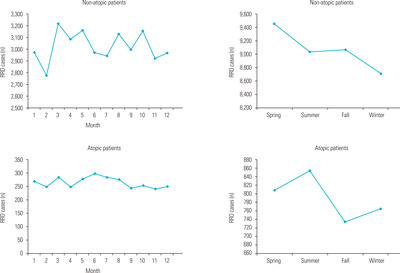 In this study, 32,088 patients who underwent 39,410 RRD operations were evaluated to assess the impact of seasonal variations and weather factors on the prevalence of RRD. In comparison with previous studies, this study included the highest number of patients to date and provides an analysis of meteorological factors in concert with seasonality, which is a novel aspect of this research.

Several conditions are required for RRD development, which involves a full-thickness retinal break as well as liquefied vitreous and a tractional force to facilitate retinal detachment [16]. One well-known factor promoting these conditions is PVD. In cases of spontaneous RRD, PVD generally occurs prior to the development of RRD [16]. Mitry et al. [17] stated that more than 85% of cases of RRD were linked to PVD. During the formation of PVD, the vitreous moves within the vitreous cavity and a tractional force could be applied to the retina where the vitreous remains attached; importantly, this phenomenon may lead to retinal breaks and RRD [16,18]. Additionally, head movement and severe eye movement can place traction loads on the retina, increasing the risk of RRD onset [19]. We believe that PVD and eye and head movements are important factors in interpreting the results of this paper.

A variety of previous studies have sought to identify the relationship between RRD and the seasons. Some studies have shown that RRD is most prevalent during the summer and that its lowest prevalence exists during the winter [4-8]. These studies also reported light- or temperature-related vitreoretinal changes or increased outdoor activity levels as possible causes of RRD [4-8]. One study documented an RRD peak during the winter, indicating a possible effect of temperature [10]. In other studies, the prevalence of RRD did not show seasonal differences [9,11-13]. In the present study, the prevalence of RRD was highest during the spring season, followed by in the summer, fall, and winter, respectively. We found that the prevalence of RRD was greatest in March and lowest in February; this sudden change may be a result of increased rates of physical activity in concert with nicer weather. Notably, physical activity and weekly leisure-time energy expenditures are significantly greater during spring and summer than during winter and fall [20, 21].

The prevalence of RRD was closely associated with average temperature, humidity, hours of sunlight, and rainfall. Rahman et al. [22] suggested that PVD is associated with increased temperature. and Auger et al. [23] documented increased tractional retinal detachment rates with elevated temperatures. In the present study, peak RRD prevalence was observed when the mean monthly temperature was 20℃ to 25℃; however, when the mean temperature topped 25℃, the prevalence of RRD experienced a sudden reduction. Both Rahman et al. [22] and Auger et al. [23] performed their studies while considering temperatures under 25℃. The risk of PVD might increase with temperature; however, in extreme temperatures, physical activity is restricted [24]. The reduction in activity in extreme temperature conditions may have caused the occurrence of RRD in the spring, rather than in the summer, in the present study.

Many studies have investigated the relationship between humidity and RRD outbreaks [7,8,22]. However, Rahman et al. [22] suggested that PVD is not associated with humidity. Additionally, in contrast with the available findings regarding temperature, knowledge of the association between humidity and physical activity is more limited [25]. In this study, humidity showed a bell-shaped association with peak RRD prevalence at 60% to 70%. It is unclear whether humidity itself directly affects the occurrence of RRD.

Rainfall was negatively associated with the prevalence of RRD. Prabhu and Raju [7] also reported that the prevalence of RRD was associated with low amounts of rainfall. Tucker and Gilliland [27] reported that one day of rain does not affect physical activity, but continuous rain does. In Korea, most rainfall occurs in the summer. In 2017, the total annual amount of rainfall was 967.8 mm, 609.7 mm of which occurred during the summer season [28]. It is possible that, because of this unique weather phenomenon in Korea (unlike the weather documented in other, similar studies), the prevalence of RRD was relatively higher in the spring than in the summer.

In this study, the prevalence of RRD was highest in March and lowest in February, and this sudden change in RRD prevalence was deemed fascinating. The average temperatures in Korea in February and March are 1.92℃ and 6.70℃, respectively. Such a sudden increase in temperature is expected to increase activity and contribute to higher rates of RRD. However, there are also other factors that the authors suspect may be social factors influencing activity rates in Korea. Schools in Korea begin a semester in March, and graduation is concentrated in February. These social factors may also trigger changes in activity levels, which can affect the risk of developing RRD. In addition, as the weather becomes warmer, patients are more comfortable with visiting the hospital, which also may cause an increase in documented RRD cases.

There were several limitations to this study. First, an occurrence of error or loss in coding is possible. If the operation was performed based on the diagnosis of vitreous hemor-rhage, these patients would not have been included in this study. Furthermore, patients in this study were impossible to distinguish from those with primary RRD, bilateral RRD, or redetachment of RRD. Second, the period of observation time was short; we could only review 3 years of RRD surgeries due to the limited data available from HIRA. Third, this study did not consider pseudophakia or degrees of myopia.

Despite these limitations, however, this study was a nationwide analysis including a large number of patients and allowed for the evaluation of the seasonality of RRD prevalence in Korea, which has not been previously assessed.