Abstract
Purpose: We present a case series of macula involving or non-involving rhegmatogenous retinal detachment successfully managed with pneumatic retinopexy with additional cryopexy and laserpexy as a primary single operation.
Case summary: A review of two patients with visually significant macula off rhegmatogenous retinal detachment which involves more than 4 clock hours in expansion was conducted. At presentation, all two were underwent a pneumatic retinopexy with expansile Perfluoropropane pure gas 0.5 mL bubble with proper cryopexy and maintenance of appropriate head position regimen without intraoperative complications. The following day, laser was applied around the margin of the retinal break and intraocular pressure was monitored closely. During postoperative evaluation, the eyes achieved a good visual acuity and fundus examination revealed a fully resolved subretinal fluid and reattached retina. During short term follow-up, the retina remained completely attached and no further complications were detected.
Conclusions: There is no significant drawback in trying pneumatic retinopexy primary in eyes that encounter the selection criteria. If a pneumatic retinopexy fails, a prompt following operation should be performed, the final anatomical and visual outcomes are not disadvantaged by the initial pneumatic procedure.
Keywords : Cryoretinopexy; Perfluoropropane gas; Pneumatic retinopexy; Retinopexy; Rhegmatogenous retinal detachment

Pneumatic Retinopexy is a technically easy, minimally invasive and cost-effective procedure for the treatment of the indicated cases of rhegmatogenous retinal detachment (RRD) when compared with other surgical approaches [1,2]. This procedure is also associated with reduced morbidity and faster postoperative recovery and a more natural reattachment of the retina compared to pars plana vitrectomy and scleral buckling. Proper patient selection depending upon the size, number, location, type and extension of the retinal breaks are critical to the success rate of procedure [3,4]. This intervention remains a useful procedure for treating certain types of primary RRDs. Anatomic success rates of 90% can be achieved when strict selection criteria are applied [5]. Superior visual acuity outcomes have also been reported [4]. Intraoperative complications are primarily related to the intraocular pressure increase caused by gas injection, or the misdirection of the gas. There is a low rate (0-4%) of postoperative complications involving improper location of the injected air or gas, generally into the subretinal space [6]. In Mongolia, we commenced to perform a pneumatic retinopexy procedure since 2019. Since this time period, a total of 14 patients underwent pneumatic retinopexy, which in two cases out of them were documented with images. It offers a cost-effective and useful technique for repairing some indicated cases of primary rhegmatogenous retinal detachment especially in low-resource countries. Generally patients are more likely to present late and complex detachments are relatively common in Mongolia. Despite this issues pneumatic retinopexy results are encouraging with high final anatomical success and reattached retinas. Herein, we conducted patients who had a 5-6-month of postoperative follow-ups to determine factors predictive of short-term functional outcome and anatomic success after pneumatic retinopexy repair.

A 63-year-old Mongolian woman presented complaining of the painless diminution of vision in the left eye sudden in onset, progressed for 20 days and then was worsen stationary for the last 10 days. She underwent cataract surgeries in both eyes. Preoperative eye evaluation summarized in Table 1 and Fig. 1.

The clinical diagnosis was made as following Macula off rhegmatogenous retinal detachment of left eye, pseudophakia of the both eyes.

First, the patient underwent a thorough scleral-depressed peripheral retinal examination to identify all retinal pathologic features. The procedure was performed under local (subconjunctival) anesthesia and aseptic technique. An anterior chamber paracentesis was performed (0.3 mL anterior chamber [AC] fluid was evacuated) using a 30-gauge needle on a plungerless 1 mL syringe followed by 0.5 mL of pure 100% Perfluoropropane gas (C3F8) was injected through the pars plana (3.5-4 mm from limbus), into the lower nasal region (at 7 o’clock) away from the retinal break and the detached area using a 30-gauge needle on 1 mL syringe then kept the patient face down positioning immediately. Five minutes after this stage, the intraocular pressure and fundus were evaluated. Intraocular pressure and retinal vessels pulsation on the optic nerve head were tolerable. Following this, the patient was instructed to position her face down for 6 hours followed by her head and chin were inclined upwards slightly over the right shoulder in the sitting or right tilted head up position so that the bubble is opposed to the break for 12 to 24 hours. Then the patient was told to maintain the position as much as possible for another 2 to 3 days. Because of bullous detachment of the retina, cryopexy was not able to be done at the same time of gas injection. The day after retina was less bullous and cryoretinopexy was applied once surrounding to the edge of retinal break at the position of 2 o’clock for sealing the retina. Considering the chorioretinal strengthening and scarring time after applying the cryo, a day after laser photocoagulation (200 µm spot sizes, 160 mV power) was applied around the tear and 360 degrees peripheral retina.

During follow-up at 7th day postoperative pneumatic retinopexy, there was an improvement in visual acuity of 6/15 in the left eye. On fundoscopy, the retina was reattached, subretinal fluid (SRF) was significantly resolved and no unidentified breaks detected (Fig. 2). The patient was seen at 1, 3, and 6 months postoperatively and remained stable. At a 6-month follow-up, the visual acuity enhanced to 6/8.5 with the attached retina and normal intraocular pressure (IOP) of 13 mmHg (Table 2).

A 50-year-old Mongolian woman presented with chief complaint of sudden appearance of a dark curtain over a temporal portion of the visual field in the left eye. She reported excellent vision in left eye until 5 days prior, when she first noticed floaters suddenly in the left eye. The eyes exam explained at Table 3 and Fig. 3. The diagnosis was made as following Macula off rhegmatogenous retinal detachment of left phakic eye, mild myopia of the both eyes. 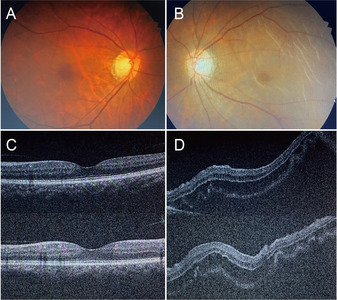 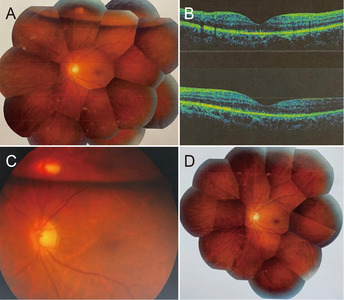 Geographically, pneumatic retinopexy is not commonly performed in Asia, Europe and United Kingdom region with the majority of physicians perform the procedure less than once a month [7,8]. Several studies have suggested the growing trend toward vitrectomy as the preferred primary surgical intervention for primary RRD, vitrectomy was over twice as popular in cases of pseudophakic, macula-off RRD with posterior capsular opacity [9,10]. In USA especially the Northeast region demonstrated a greater preference for pneumatic retinopexy when compared to all other regions, also revealed a trend toward a lower preference for pars plana vitrectomy compared to the West and South because of operating room burden and physician treatment preference.

Regarding pneumatic retinopexy, studies have indicated a single operation success rate of approximately 80 percent and greater than 95 percent with reoperations [11,12]. Ideal case selection and peripheral 360 degrees retinopexy can increase the single operation success rate to 97%. The lower success rates associated with the latter two conditions are thought to be related to the presence of multiple small missed or new peripheral retinal breaks, frequently in conjunction with peripheral vitreoretinal traction [13,14].

Ellakwa [15] reported their long-term results for 40 cases of retinal detachment treated with pneumatic retinopexy. Forty eyes of 40 patients with primary RRD due to a single U-shaped break in 28 eyes (70%) or round hole/s in 12 eyes (30%) occupying less than 1 clock-hour of the upper quadrant of the retina were included in the study retrospectively after treatment by pneumatic retinopexy. Mean postoperative best corrected visual acuity (BCVA) in patients with successful reattachment by pneumatic retinopexy was 0.40± 0.21 after 3 years, while the mean postoperative BCVA in patients who required another procedure was 0.22 ± 0.13 at the 3-year follow-up [15].

Davis et al. [5] reported the result of pneumatic retinopexy procedure involving two hundred thirteen patients (mean follow-up 24.6 months) demonstrated that 64.8% of patients had a successful pneumatic retinopexy and vitreous hemorrhage and retinal detachment greater than 4.5 clock hours were the two factors that significantly affected successful outcome (p = 0.04 and 0.01, respectively). The overall mean final visual acuity was 20/40, with a mean of 20/30 in the success group and a mean of 20/60 in the failure group (p = 0.001) [5].

Martínez-Mujica et al. [16] identified three systematic reviews including six studies overall, of which three were randomized trials and concluded the anatomic result might be better with scleral buckling in terms of retinal reattachment and risk of recurrence, but the risk of ocular adverse events might be lower with pneumatic retinopexy.

Tanaka and Goldberg [17] described a case which relieving traction without retinopexy or pneumatic alone may be is sufficient for retinal detachment repair in selected cases. Fifty-seven-year-old woman (visual acuity [VA] of right eye 6/9.5) had fovea-sparing retinal detachment with a single horseshoe break at 11 o’clock and fluid tracking into the macula. 0.4 mL SF6 was injected without retinopexy. On postoperative day 7, right eye had a visual acuity of 6/6 and the retina was grossly flat. Superior temporal retinal tear had operculated and traction was released [17]. Suzuki et al. [18] reported a case of successful pneumatic retinopexy for retinal detachment associated with a progressive superior temporal retinoschisis.

In our cases proper cryopexy and laser photocoagulation that allow chorioretinal adhesion serve as a barrier to additional fluid entering the subretinal space were the core principle of our successful retinal detachment repair and anatomical reattachment of the retina with a single intervention.

This case series aimed to present the short-term structural and functional outcome of pneumatic retinopexy in RRD in two patients after an average follow-up period of 5-6 months. In our cases involve proper cryotherapy and laser photocoagulation, in addition to endotamponade gas of C3F8 with the maintenance of an appropriate head position. Generally, patients are more likely to present late, and complex detachments are relatively common in Mongolia. Despite these issues, the pneumatic retinopexy results are encouraging with higher final anatomical success, and reattached retinas obtaining vision of 6/10 or better. We already know that several previous reports indicated decreased success rate in patients with pseudophakic and/or aphakic eyes when compared with patients with phakic eyes.

Pseudophakic patients tend to have small tiny breaks near ora serrata which mean they can open up and you can miss breaks. So, it is essential to do scleral-depressed peripheral retinal examination to identify all retinal pathologic features carefully before the procedure. Pneumatic retinopexy could still be done in these pseudophakic patients. In the most patients pneumatic retinopexy will either work or at least decrease the SRF which makes the next surgery much easier. If it works then perfect, if not then you can do surgery and often it is much easier because they are less bullous.

Pneumatic retinopexy could be an alternative in eyes that encounter the selection criteria. If a pneumatic retinopexy fails, a following operation is needed timely. The final anatomical and visual outcomes are not disadvantaged by the initial pneumatic retinopexy procedure. The findings of these case study suggest that careful case selection, proper postoperative positioning and additional cryopexy and laser retinopexy has been considered as a primary treatment in selected cases of RRD.

Journal of Retina. Also, we would like to express another special thanks to Dr. Sun Teak Lim and his team for training Mongolian Ophthalmologists at LEE YEON Eye Hospital, Gwangju, South Korea in 2009 which was the initial training in the field of Vitreo-Retina. This vitreo-retinal training in South Korea was a cornerstone to establishing and developing the healthcare for patients suffering from a variety of vitreo-retinal diseases in Mongolia.

Written informed consent was obtained from the patient for publication of this case report and any accompanying images. An Approval of Research Ethical Control Board of Mongolian National University of Medical Science was obtained (REB No. 2020/3-08).

The authors declare no conflict of interest relevant to the content of this article.