* This was submitted as a poster for the 2018 ARVO Annual meeting, held in Honolulu, Hawaii, April 29 – May 3, 2018.
Received August 20, 2021; Revised December 22, 2021; Accepted January 2, 2022.
This is an Open Access article distributed under the terms of the Creative Commons Attribution Non-Commercial License (http://creativecommons.org/licenses/by-nc/3.0/) which permits unrestricted non-commercial use, distribution, and reproduction in any medium, provided the original work is properly cited.

Abstract
Purpose: To evaluate the effect of alcohol on vascular endothelial growth factor (VEGF) expression in retinal pigment epithelium (RPE) cells and angiogenesis of vascular endothelial cells.
Methods: To investigate the direct effect of alcohol on VEGF expression, RPE cells were exposed to bevacizumab 0.5 mg/mL, ethanol 600 mMol, and bevacizumab 0.5 mg/mL + ethanol 600 mMol, and the amount of VEGF expression was detected by Enzyme-Linked Immunosorbent Assay. In another experiment, RPE cells were treated with bevacizumab 0.5 mg/mL, ethanol 600 mMol, VEGF 5 ng/mL, bevacizumab 0.5 mg/mL + ethanol 600 mMol, and bevacizumab 0.5 mg/mL + VEGF 5 ng/mL for 24 hours; the medium was then used in the human umbilical vein endothelial cells (HUVEC) capillary tube formation assay to investigate the effect on the formation of new vessels. To analyze angiogenesis, the number of extremities, branches and total branch length were analyzed using the ImageJ software.
Results: No significant increase was observed for VEGF expression in the ethanol group. VEGF expression was also not detected in the bevacizumab and bevacizumab + ethanol groups. For HUVEC capillary tube formation, the number of extremities in ethanol, VEGF, bevacizumab + ethanol, and bevacizumab + VEGF groups were significantly increased as compared to control. Also, the number of branches and total branch length showed statistically significant increase in the ethanol and VEGF groups.
Conclusions: This study demonstrates that alcohol has a positive effect on new vessel formation but does not increase VEGF in RPE cells. These results imply that consuming alcohol may be associated with neovascularization or the disease activity of age-related macular degeneration and anti-VEGF treatment response.
Keywords : Alcohols; Choroidal neovascularization; Intravitreal injection; Macular degeneration; Vascular endothelial growth factor

Age-related macular degeneration (AMD) is a leading cause of severe visual loss especially in old age [1-3]. Based on the presence of choroidal neovascularization (CNV), AMD is typically categorized into two types: dry and wet (exudative) [1,2]. Vascular endothelial growth factor (VEGF) plays a fundamental role in CNV [4]; therefore, intravitreal injection of an anti-VEGF agent is globally accepted as a standard treatment for wet AMD [5-8]. The dosing schedules of anti-VEGF intravitreal injections are diverse. In terms of the increase in visual acuity, the best efficacy has been observed with a monthly injection of anti-VEGF [7]. However, in actual clinical practice, monthly injections are difficult to administer because of the increased medical and economic burden borne by patients and physicians. Thus, alternative dosing regimens, such as pro re nata or treat-and-extend regimens, have been devised. Furthermore, the interval between injections varies depending on the symptoms of the patient or disease activity. For example, if the patient has more than a-five letter decrease in best-corrected visual acuity or if any evidence of disease activity is identified on optical coherence tomography such as a large increase or recurrence of subretinal or intraretinal fluid, the presence of a subfoveal hemorrhage, or large extrafoveal hemorrhage, then the patient requires additional anti-VEGF injections [9,10]. Since the worsening of the disease increases the frequency of intravitreal injections, thereby resulting in increased medical and financial burden, it is important to detect and block the factors that cause disease exacerbation.

In clinical situations, some patients require more injections than others because their response to anti-VEGF is less effective or the disease worsens more frequently. We believe that this could be related to alcohol consumption. Therefore, this study aimed to evaluate the effect of alcohol on VEGF expression in retinal pigment epithelium (RPE) cells and the angiogenesis of vascular endothelial cells. This in turn could influence disease activity of AMD or response of intravitreal anti-VEGF treatment in AMD patients.

Institutional Review Board/Ethics Committee ruled that approval was not required for this study. Two experiments were developed to investigate the possible effect of alcohol on AMD disease activity and the response of intravitreal anti-VEGF treatment. A VEGF expression experiment was first conducted to investigate the direct effect of alcohol on VEGF expression in RPE. Next, a human umbilical vein endothelial cell (HUVEC) capillary tube formation assay was used to determine whether alcohol induces neovascularization. Before the VEGF expression and HUVEC capillary tube formation assay, a cell viability assay determined the optimal concentrations required for bevacizumab and ethanol and their individual effects on VEGF expression in RPE. All experiments were performed independently three times.

To investigate the optimal concentration of bevacizumab and ethanol, RPE cells were exposed to 0, 0.125, 0.25, and 0.5 mg/mL bevacizumab and 0, 80, 200, and 600 mMol ethanol. Treated cells were then washed with phosphate-buffered saline, and 10 μm of CCK-8 (Cat. CK04; Dojindo Molecular Technologies, Rockville, MD, USA), and 90 μL of FBS free media was added to each well, followed by incubation for 1 hour at 37°C. The optical density was measured by a microplate reader (EL × 8,000) at 450 nm wavelength.

Exposure of RPE cells to bevacizumab and ethanol

Detection of VEGF by ELISA

Geltrex (Life Technologies Corporation, Cat. A1413202, Carlsbad, CA, USA) was added to each plate well at a concentration of 100 μL/cm2 in a 96-well plate. The plates were then incubated at 37°C for 30 minutes for solidification of the gel. ARPE-19 cells were seeded at a cell density of 5 × 105 cells per well in complete media in a 6-well plate for 24 hours, followed by starvation in medium 200-PRF for 24 hours. The cells were then exposed to diluted ethanol, bevacizumab, and recombinant human VEGF 165 protein (Cat. 293-VE; R&D Systems) for 24 hours, and the medium was collected from the culture wells. HUVEC (Cat. C-005-5C; Gibco) was seeded on the coated plates at a concentration of 4 × 104 cells per 1 cm2 and cultured using the above-sensitized media. After 3-, 6-, and 24-hour incubation, images were taken using an OLYMPUS CKX41 microscope.

For analysis of the tube formation assay, the number of extremities, branches, and total branch length per mm2 was quantified with the Angiogenesis Analyzer plugin ImageJ [11].

The mean ± standard deviation values are reported for the results of three independent experiments. SPSS Statistics (ver. 25.0, IBM Co., Armonk, NY, USA) was used to calculate the statistical significance. The Kruskal-Wallis test was applied, and a p-value < 0.05 was considered significant.

Fig. 1. Effect of (A) bevacizumab and (B) ethanol on the cell viability of retinal pigment epithelial cells. No statistical significance was noted at all concentrations of bevacizumab and ethanol. 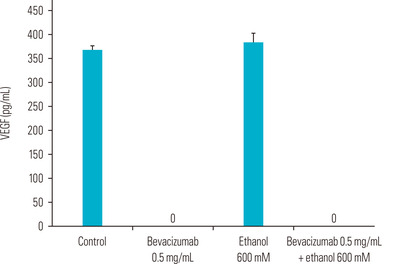 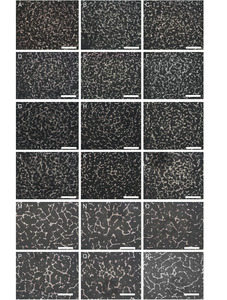 The relationship between alcohol consumption and AMD remains unclear. Although cigarette smoking, and not drinking, is generally considered a risk factor of AMD [12-14], some animal experiments have shown that alcohol can affect AMD, specifically increasing CNV size [15,16]. The current study was undertaken to examine the relationship between alcohol and AMD by considering two aspects: whether alcohol directly increases the VEGF expression in RPE cells, and whether alcohol increases new vessel formation. Our studies in RPE cells reveal that the VEGF expression remained unaffected after treatment with ethanol. However, a significant increase in the number of extremities and branches, as well as total branch length was noted in the tube forming assay. The results of this study indicate that alcohol does not directly induce the expression of VEGF in RPE but increases angiogenesis in vitro.

Previous studies have found that ethanol promotes VEGF expression in tumor angiogenesis [17-19]. Additionally, in several studies, there is a relation between alcohol and CNV in animal models [15,16]. Bora et al. [15] and Kaliappanet et al. [16] showed that the size of CNV increases in alcohol-fed rats. Bora et al. [15] used a laser-induced CNV rat model and fed the rats alcohol for 10 weeks. They showed that heavy and prolonged alcohol consumption was associated with increased ethyl ester accumulation in the choroid and increases in the size of CNV [15]. Kaliappanet et al. [16] showed that the complement system was related to increasing CNV size and alcohol consumption. The expression of CD59 was reduced in animals fed with alcohol as compared to the control, and this was associated with exacerbation of CNV [16]. Numerous other reports have also demonstrated the relationship between the complement system and CNV development [20-23]. These studies have provided a link between alcohol and CNV or wet AMD, which is difficult to explain solely by increasing VEGF.

In addition to the association of the complement system and CNV, increased vascular permeability resulting from alcohol consumption might also result in increasing CNV. It is well established that ethanol breaks the vascular endothelial barrier, thereby increasing vascular permeability [24]. In a study of vascular injury in the mucosa of the glandular stomach, the injury started within 1 minute after alcohol administration and appeared with enhanced vascular permeability [25]. In particular, this shows that alcohol could have a greater impact on immature vasculature such as the CNV. Since they are immature blood vessels, the leakage of blood or plasma proteins occurs more in CNV than in normal vessels [26]. In the case of immature vessels, the pericytes are less and loosely attached when compared to normal vessels, thereby enhancing the permeability of immature blood vessels [27-30]. From this perspective, the permeability of retinal and choroidal vessels could increase in patients who consume alcohol. The increased vessel permeability could affect the course of AMD, including the amount of subretinal fluid and hemorrhage, and the size of pigmented epithelial detachment or CNV, which are the main causes for increasing the number of anti-VEGF injections. In summary, the following inference can be made. Alcohol induces immature angiogenesis of the retina and choroid, thereby increasing vascular permeability. Increased vascular permeability increases the incidence of subretinal fluid requiring treatment in patients with AMD.

One of the limitations of this study is that it is an in vitro study and therefore difficult to infer directly to real-world conditions. The concentration of ethanol used in this study was 0.06 mMol since it showed a maximum effect in the cell experiment without affecting cell viability. However, this is equivalent to 3.65% of diluted ethanol, which is too high for practical application. The experiments were not carried out with lower concentrations of bevacizumab and ethanol. As this study was an in vitro study, it is difficult to conclude decisively before in vivo studies are performed. For an in vivo study, it should be necessary to adjust the appropriate concentrations of alcohol and bevacizumab. In addition, interpersonal differences, such as the frequency of drinking or the ability to degrade alcohol, should be considered in an in vivo study.

In summary, this in vitro study indicates that ethanol has no effect on the expression of VEGF but increases tube formation. The result implies that alcohol could affect the disease activity of AMD and response to anti-VEGF treatment at the cellular level and is related to immature neovascularization. Subsequent studies that will identify possible causes of new capillary growth and confirm our results in vivo are warranted.