Abstract
Purpose: The topographic characteristics of the macula where the internal limiting membrane (ILM) had been removed were investigated to provide a biomarker to diagnose the post-ILM removal macula (PIRM).
Methods: This study included 54 patients who had undergone vitrectomy and ILM peeling for idiopathic epiretinal membrane or macular hole. Their medical records were retrospectively reviewed. Fundus photographs and optical coherence tomography (OCT) obtained at least 1 year postoperatively were analyzed. Macular thickness was compared to that of the fellow non-operated eye in nine early treatment diabetic retinopathy study (ETDRS) subfields. The incidence of dissociated optic nerve fiber layer (DONFL) and notable ILM removed area were assessed using photographs and en-face OCT images.
Results: The analyzed images were obtained at an average of 15.6 months postoperatively. Macular thickness showed significant differences among the four ETDRS subfields. Typically, the center and nasal subfields were thickened. The inner temporal to inner nasal thickness ratio was the most diagnostic with an area under the curve of 0.899. The ILM-removed area was notable in 21 eyes (38.9%) from the photographs and 19 eyes (35.18%) from the en-face image. DONFL was noted in 37 (68.5%) and 39 (72.2%) eyes, respectively.
Conclusions: PIRM showed the asymmetric thickening of the nasal subfields, and low parafoveal temporal to nasal thickness ratio was most diagnostic. Our results may be helpful in diagnosing PIRM with unknown previous ophthalmic history.
Keywords : Dissociated optic nerve fiber layer appearance; Epiretinal membrane; Internal limiting membrane peeling; Macular hole; Topographic characteristics

The internal limiting membrane (ILM) is the innermost structure of the sensory retina composing the anatomical boundary to the vitreous, and is related to the development of various diseases, including vitreoretinal interface diseases, such as epiretinal membrane (ERM) and idiopathic macular hole (MH) [1,2]. Since the first report of ILM peeling in patient with Terson syndrome [3], the technique has become increasingly popular. ILM removal is now performed as a common procedure for the abovementioned diseases for the prevention of recurrence or the improvement of surgical outcomes [4,5].

More than two decades have passed since the introduction of ILM peeling, and it is not difficult to find patients visiting an ophthalmologic clinic with an eye having a macula from which the ILM had been peeled by another surgeon. Sometimes patients are unsure about their surgical history and transferred for evaluation to exclude vision threatening disease in the macula.

Many studies have described the topographical changes in the macula after removing ILM [6-12]. After ILM peeling, the thickness of the retinal nerve fiber (RNF) layers became thinner in the parafoveal area [10]. Due to the contraction of the RNFs, the fovea was displaced to the optic disc [6-9], and the temporal macula became thinner than the nasal macula [11,12]. It is possible to diagnose these characteristic findings.

Herein, we investigated the topographic changes of the macula after ILM removal to describe the characteristics of the post-ILM removal macula (PIRM) and provide helpful information for diagnosis.

This comparative study was conducted retrospectively following the principles of the Declaration of Helsinki and was approved by the Institutional Review Board of the Pusan National University Hospital. The study included patients who had undergone vitrectomy and ILM peeling for idiopathic ERM or idiopathic MH from January 2016 to June 2020 and were followed-up for 1 year or more at the Pusan National University Hospital. Eyes with other conditions that might have affected the macula topographically, such as diabetic retinopathy, retinal vein occlusion, retinal detachment, ocular trauma, uveitis and previous vitreoretinal surgery, were excluded. Patients with the above conditions in the fellow non-operated eye were also excluded.

The retinal thickness of the ETDRS subfields was compared to that of the fellow normal eye. The ratios of temporal- to-nasal (TN) and superior-to-inferior (SI) thicknesses were also calculated and compared. Fundus photographs and en-face images were assessed to identify the area of ILM removal and dissociated optic nerve fiber layer (DONFL) findings. The ILM peeled area was assessed based on the sharp demarcation line between the areas with different reflexes in fundus photographs and en-face OCT images (Figs. 1, 2). As an adjuvant for ILM staining, brilliant blue G was used in all cases, and the ILM was peeled from an area of at least 3-disk diameters (DD). DONFL appearance was defined as arcuate retinal striae arranged along the course of the RNFs on the fundus photographs. In en-face images, DONFL was defined as striae with low signal intensity caused by small depressions in the inner surface of the retina in the OCT image (Figs. 1, 2). Two trained readers (SHK and BHP) blindly assessed the ILM peeled area and DONFL appearance. 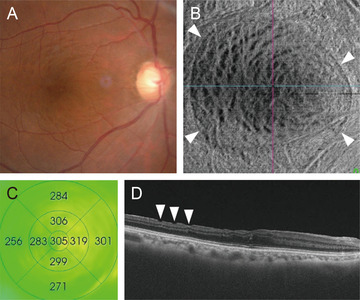 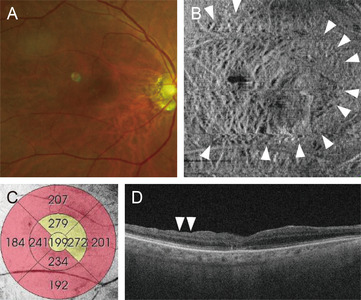 The descriptive values were calculated, and the thickness was compared to that of the normal eye using the Wilcoxon signed-rank test. The diagnostic value of the subfield thickness was assessed using a receiver operating characteristic (ROC) curve. Statistical analysis was performed using the Statistical Package for Social Sciences for Windows version 20.0 (SPSS, Inc, Chicago, IL, USA). A p-value < 0.05 was considered statistically significant. 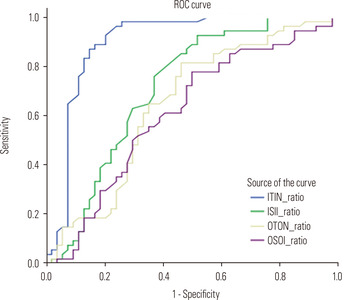 Fig. 3. The receiver operating characteristic (ROC) curves to predict the macula after the internal limiting membrane compared to the macula of the fellow normal eye. The ROC curves illustrating the prediction performance of retinal thickness ratio of temporal-to-nasal (TN) and superior-to-inferior (SI) subfields. The area under the curve of the inner TN ratio was 0.899. ITIN = inner temporal to nasal; ISII = inner superior to inferior; OTON = outer temporal to nasal; OSOI = outer superior to inferior.

We investigated the morphological characteristics of PIRM, namely the macula after ILM removal, and found that the inner TN subfield thickness ratio had a diagnostic value. DONFL was a specific finding after ILM removal, with a sensitivity of 72.2% and 68.5% in OCT images and color fundus photographs, respectively.

As mentioned in the introduction, ILM peeling is commonly performed for various conditions, including MH [13], ERM [14], myopic tractional maculopathy [15], and diabetic macular edema [16]. With the advent of the surgical skills, instruments, and vital dyes, the risk associated with the technique has decreased. Excluding the complications related to the surgical procedure, postoperative metamorphopsia was the only functional adverse event after ILM peeling [7,17]. Favorable visual rehabilitation allows patients to return to their daily lives without a close follow-up for retinal pathology. Accordingly, it is not rare that PIRM is misdiagnosed as a macular disease in a screening examination or by a non-retinal specialist. This study was conducted to provide information to define PIRM when a previous ocular history was unavailable.

The contraction of the RNF is the main mechanism underlying the macular deformation after ILM peeling [6,12,18]. According to theory, the ILM is a relatively rigid structure that holds the sensory retina in position and removing it allows the sensory retina deform. The RNFs comprised mainly microtubules and may contract via depolymerization, causing the axon to shrink [19]. All layers of the sensory retina can be displaced by the RNF contraction [20]. The arrangement of RNFs in the area exposed by removing the ILM could explain the diverse postoperative findings, and the hypothesis was supported by the following studies [7,8].

The significantly lower TN thickness ratio in the PIRM can also be explained by the above mechanism. The sensory retina, from which the ILM had been removed, was deformed by the RNF contraction, and the foveal tissue was displaced nasally by the summation of all the force vectors. Consequently, the temporal retina became thin and the nasal retina thickened.

The second finding of a low SI thickness ratio might have been related to the inferior displacement of the fovea caused by gravity [6]. Another study in idiopathic MH suggested buoyancy as the mechanism [8]. However, the inferior thickening was noted in ERM without a gas tamponade, and gravity is a more relevant explanation.

The ILM-peeled area was observed directly via fundus photographs or en-face OCT images. However, their sensitivity was as low as less than 40% (Fig. 1).

DONFL refers to arcuate retinal striae arranged along the course of the RNFs [21]. The investigators reached a consensus that DONFL is caused by ILM peeling, as DONFL was noted only within the ILM-peeled area [22,23]. No associations were found with the vital dye or peeling techniques [23,24].

DONFL is a specific finding associated with prior ILM peeling. As shown in the present and in previous studies, DONFL appearance was not observed in any ILM-unpeeled eyes [25]. The sensitivity of DONFL was not as high as the specificity and varied from 54% to 84% [22,23,25]. As DONFL corresponds to the dimples on the inner retinal surface, it can be depicted in a three-dimensional volume rendering or an en-face image along the segmentation of the ILM [22]. The sensitivity of the en-face image (72.2%) was slightly higher than that of the fundus photograph (68.5%) in our study (Fig. 2).

In summary, low TN and SI subfield thickness ratios suggested the ILM-peeled macula, namely PIRM, which may be confirmed by demonstrating an ILM-peeled area or a DONFL appearance on a fundus photograph or an en-face OCT image obtained at the ILM segmentation. The present study had several limitations. This was a retrospective single- center study with a relatively small number of cases. In addition, the PIRM was compared with the contralateral normal macula, but not with pathologic eyes. Nevertheless, the data of our study will be helpful in diagnosing PIRM when information on previous ophthalmic history is lacking.