Among complications related to cosmetic facial fillers, ophthalmologists are confronted with retinal artery occlusions (RAOs) or ciliary artery occlusions (CAOs) due to accidental injection of filler material into arteries distributed in the facial area [1]. Especially, in areas lacking collaterals, accidental injection of fillers into vessels may cause retrograde flow and occlude the ophthalmic artery and its branches, causing artery occlusions [2]. These ischemic complications normally result in decreased visual acuity and visual field constriction due to inner retinal layer atrophy. However, herein, we report a first case of iatrogenic RAO and CAO complicated by submacular and subhyaloid hemorrhage. The study was approved by the Institutional Review Board at Gangnam Severance Hospital (IRB approval number: 3-2021-0716).

A 44-year-old woman with no previous medical history presented with a sudden upper visual field defect followed by progressive narrowing of the visual field of the right eye immediately after receiving cosmetic facial filler injection of hyaluronic acid at the glabellar area. Her initial best corrected visual acuity (BCVA) was 20/50 in the right eye and 20/20 in the left eye as measured using a Snellen chart. The right eye was mid-dilated and exhibited sluggish pupil reflex with grade 2 relative afferent pupillary defect. Fundus examination showed disc swelling with blurred margins, whitish ischemic changes superior and nasal to the macula with multiple segmental box-carring RAOs superior and nasal to the optic disc (Fig. 1A). Optical coherence tomography (OCT) revealed thickening of inner retinal layers at ischemic areas (Fig. 1B). Early fluorescein angiography (FA) revealed segmental blockage of superotemporal and nasal branch retinal arteries. In late FA there were intermittent hyperfluorescence at the arterioles proximal to the segmental blockage sites, suggestive of dye pooling due to vascular stasis (Fig. 1C). Indocyanine green angiography (ICGA) showed choroidal hypoperfusion at the watershed zone of choriocapillaris. There were no signs of pre-existing macroaneurysm, choroidal neovascularization, new vessel or choroidal rupture at the onset of RAO. With the diagnosis of multiple RAO and posterior CAO, the patient received antiglaucoma eye drops and was advised on ocular massage to prevent further complications. 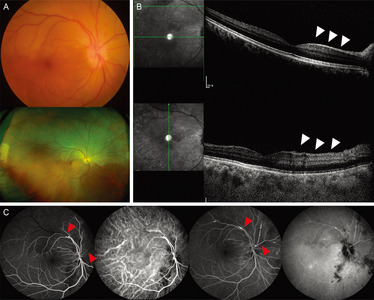 On the fourth day of follow-up, the patient’s visual acuity dropped to hand motion. Fundus examination and OCT revealed extensive subretinal and subhyaloid hemorrhage (Fig. 2A, B). Due to the blocked fluorescence on FA/ICGA, the etiology for submacular and subhyaloid hemorrhage was unclear. Delay of vascular filling at superotemporal branch retinal artery and prominence of choriocapillaris watershed zone were observed (Fig. 2C). Since submacular hemorrhage is detrimental to visual outcome, a prompt management was required before understanding the cause of the hemorrhage. Since the most common etiology of submacular hemorrhage is choroidal neovascularization, the patient received an intravitreal injection of 1.25 mg bevacizumab followed by a 0.2 mL pure C3F8 (octafluoropropane) gas injection (100%) for pneumatic displacement [3,4]. After the procedure, subretinal hemorrhage gradually regressed (Fig. 2D). On the second month of follow-up, fundus examination and OCT showed dehemoglobinized blood at fovea (Fig. 2E, F). FA/ ICGA indicated persistent delayed perfusion at the superotemporal branch retinal artery and improved perfusion of the watershed zone (Fig. 2G). There was no definite vascular lesion that could explain the cause of extensive subretinal and subhyaloid hemorrhage on post injection FA/ICGA. Without further treatment, the retina was stable and showed no sign of recurrence with BCVA of 20/100 at 1 year follow-up. 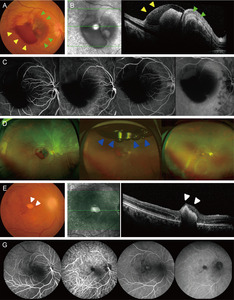 This is the first reported case of submacular hemorrhage and subhyaloid hemorrhage following multiple iatrogenic artery occlusions induced by accidental intravascular filler injection. An accidental breakage of supraorbital artery or supratrochlear artery during glabella injection may have been the initial insult. Small particles of the injected filler may have migrated to cause multifocal occlusions. The pathogenic mechanism of submacular hemorrhage remains unknown. The most common etiologies are choroidal neovascularization, retinal macroaneurysm, and trauma [5]. In our case, there were no ocular signs related to these etiologies. However, as evidenced by persistent perfusion delay of branch retinal artery and hypoperfusion of the watershed zone, submacular hemorrhage may have been due to remnant filler material within retinal and choroidal circulation after causing acute occlusion. Persistent blockage may cause a disturbance in normal laminar flow, leading to sudden turbulent flow and vascular rupture at the choriocapillaris, where autoregulation is poor [6-8].

Although submacular hemorrhage after multiple artery occlusions following cosmetic facial filler injection is a rare complication, patients and clinicians should be aware, especially when posterior ciliary arteries are involved. Bevacizumab injection combined with 12% C3F8 gas injection may be a possible treatment option when faced with such complications.

The authors have no potential conflicts of interest to disclose.