Abstract
Purpose: We present the first case of retinal vasculitis following intravitreal brolucizumab injection in South Korea.
Case summary: A 76-year-old man with a medical history of hypertension who had been diagnosed with polypoidal choroidal vasculopathy of the left eye was treated with anti-vascular endothelial growth factor (VEGF) agents. Fifteen intravitreal ranibizumab, 17 aflibercept, and 12 bevacizumab injections were administered. On April 27, 2021, the anti-VEGF agent was switched to brolucizumab. Eight weeks after the first brolucizumab injection, the patient visited our clinic with conjunctival redness and cloudiness of vision in his left eye. A mild inflammatory reaction with grade 0.5 + cells was observed in both the anterior and vitreous chambers. Fundus photography showed cotton wool spots in the inferior and superior arcade, indicating acute retinal ischemia. Moderate leakage was observed at the optic disc along with cotton wool spots lesions and peripheral retinal capillaries on fluorescein angiography. Optical coherence tomography angiography (OCTA) showed significant reduction of vessel density (VD) in the superficial layers. The patient was treated with oral prednisolone (30 mg) and topical corticosteroids to relieve inflammation and vasculitis. After 1 week of treatment, the patient’s symptoms, inflammation, and cotton wool spots on the vascular arcades had regressed, and the VD of the superficial layers on OCTA had normalized.
Conclusions: This is the first reported case of retinal vasculitis following intravitreal brolucizumab injection in South Korea. We suggest that VD of the superficial layers that is visible on OCTA can be a useful index to diagnose and track brolucizumab-induced retinal vasculitis.
Keywords : Macular degeneration; Brolucizumab; Retinal vasculitis; Tomography, optical coherence; Uveitis

Injection of anti-vascular endothelial growth factor (VEGF) agents is the gold standard treatment for neovascular age-related macular degeneration (nAMD). Brolucizumab (Beovu; Novartis Pharma AG, Basel, Switzerland), a humanized monoclonal single-chain variable fragment antibody that binds to the isoforms of VEGF-A, has been approved by the Food and Drug Administration to treat nAMD. HAWK and HARRIER phase 3 trials have shown that brolucizumab is not inferior to aflibercept (Eylea; Regeneron, New York, NY, USA), has similar safety profiles, and provides better anatomical outcomes than aflibercept [1,2]. However, since its use began, there have been reports of severe intraocular inflammation (IOI) and retinal vasculitis after treatment, leading to vision loss [3,4]. Currently, no cases of retinal vasculitis have been reported following intravitreal brolucizumab injection in South Korea since its introduction in April 2021. Herein, we describe the first patient with IOI and retinal vasculitis following intravitreal brolucizumab injection in South Korea.

A 76-year-old man with a medical history of hypertension was receiving anti-VEGF agents for refractory polypoidal choroidal vasculopathy (PCV) of the left eye. After the initial diagnosis on September 26, 2016, 15, 17, and 12 intravitreal ranibizumab (Lucentis; Genentech, Oceanside, CA, USA), aflibercept, and bevacizumab (Avastin; Genentech) injections, respectively, were administered with a mean injection interval of 38.14 days. On April 27, 2021, the anti- VEGF agent was switched to brolucizumab to treat persistent pigment epithelial detachment (PED) and intraretinal fluid (IRF). The best-corrected visual acuity (BCVA) before the switch was 20/63 measured using a Snellen chart. The intraocular pressure (IOP) was 16 mmHg and was obtained by non-contact tonometer. Fundoscopy (Fig. 1A) revealed an orange polypoidal lesion superior to the fovea. Persistent refractory PED with a relatively hyper-reflective section at the posterior margin of the PED was noted on optical coherence tomography (OCT) (Fig. 1B, E). Mild IRF, which is indicative of active disease, was noted (Fig. 1B). On OCT angiography (OCTA), the hyper-reflective section of the PED was confirmed as new vessels beneath the retinal pigment epithelium (Fig. 1C, F), which confirmed the diagnosis of type I choroidal neovascularization (CNV) with PCV. 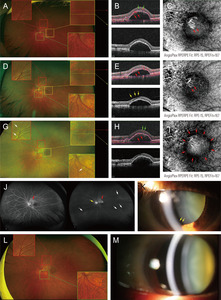 At 4 weeks after the first brolucizumab injection, the patient’s initial response to treatment was favorable. Anatomically, both the IRF and PED decreased in size on OCT (Fig. 1E). The BCVA improved to 20/50 functionally. There were no signs of IOI (Fig. 1D).

At 8 weeks after the first brolucizumab injection, the patient visited our clinic with conjunctival redness and cloudiness of vision in his left eye. The BCVA had dropped to 20/63, and the IOP was elevated to 33 mmHg. The conjunctiva was moderately injected, and a mild inflammatory reaction with grade 0.5 + cell 0 flare was observed in both the anterior and vitreous chambers. Corneal endothelial dusting was noted, suggestive of IOI (Fig. 1K). Fundus photography showed cotton wool spots in the inferior and superior arcade, indicating acute retinal ischemia (Fig. 1G). On fluorescein angiography (FA), moderate leakage was observed at the optic disc along with cotton wool spots lesions and peripheral retinal capillaris (Fig. 1J). OCTA showed a significant reduction in vessel density (VD) in the superficial layers (Fig. 2). CNV reactivation was noted by vessel leakage with late staining (Fig. 1J, red arrows). Additionally, the PED and IRF were increased, as viewed on OCT (Fig. 1H, I). The patient was treated with oral prednisolone (30 mg) and topical corticosteroids to relieve the IOI and vasculitis. IOP-lowering agents were used to control the uveitis-induced IOP elevation. 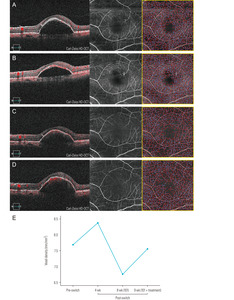 After 1 week of treatment, the patient’s symptoms were alleviated. The anterior and vitreous chambers were clear. No endothelial dusting was observed (Fig. 1M). The cotton wool spots on the vascular arcades regressed (Fig. 1L). After IOI resolution, the patient was switched back to aflibercept for PED and IRF treatment. Informed consent for publication of clinical data was obtained from the study participant, and he study was approved by the Institutional Review Board at Gangnam Severance Hospital (IRB approval number: 3-2021-0395). There were no interventions non-standard and/or novel in this case report. The patient of this case report has agreed to participate.

This is the first reported case of IOI with retinal vasculitis following intravitreal brolucizumab injection in South Korea. Studies from other countries have shown that post-injection IOI must be considered when initiating brolucizumab treatment. In a post-hoc review of the HAWK and HARRIER trials, the incidence of IOI after intravitreal brolucizumab injection was 4.6%, which was higher than that of eyes treated with aflibercept (1.1%) [5]. In a short-term multicenter Japanese study, the incidence of IOI was higher (9.4%) in East Asian patients than in Caucasian patients [6]. Furthermore, t he IOI i ncidence r ates were t wo- t o t hreefold higher among Japanese patients enrolled in the HAWK study (IOI: 12.9%, retinal vasculitis: 9.9%, retinal vascular occlusion: 4.95%) [7], suggesting that East Asian patients are at greater risk of developing IOI. In another short-term study that was comprised of Japanese patients with type 1 CNV alone, the incidence of IOI was 19.0%, which was the highest ever reported [8]. Although further study is required, East Asian patients and patients with type 1 CNV might be more vulnerable to brolucizumab-induced IOI.

Our case is unique because we identified a change in blood flow serially before and after brolucizumab treatment and at the onset of retinal vasculitis using OCTA. One month after beginning brolucizumab injections, the CNV VD decreased, showing effectiveness of the injections in controlling CNV activity. At 2 months after the injection, the CNV became active, as indicated by the increased CNV VD. To date, only one study has documented the change in CNV on OCTA after brolucizumab injection and showed that brolucizumab did not induce significant CNV regression at 30 days after injection [9]. A phase 3 trial with a larger study group and a longer follow-up period is currently in progress to assess the changes in OCTA parameters both before and after brolucizumab treatment (ClinicalTrials.gov, Identifier: NCT04239027).

The authors have no potential conflicts of interest to disclose.